Book of the month: Pope Joan by Donna Woolfolk Cross

Pope Joan by Donna Woolfolk Cross has made me even more grateful to be a woman living in 2015. This book falls under the genre of Historical Fiction – unfamiliar territory for me, but well worth a read. Here’s why…

What it’s about:
“For a thousand years, her existence has been denied. She is the legend that will not die--Pope Joan, a controversial figure of historical record who, disguised as a man, rose to rule Christianity in the 9th century as the first and only woman to sit on the throne of St. Peter.”

This is the story of an intelligent young girl who escapes the contempt of her misogynous Priest father. Following the death of her eldest brother Matthew, Joan and her other brother, John travel to a schola (school) where they are both educated and taught to read (a rare opportunity for a woman in this era).

Following a Viking attack on their village (of which Joan is the sole survivor), Joan pretends to be her brother and dresses as a man to protect herself as she flees to the monastery of Fulda. Retaining the identity of her brother, she is initiated into the brotherhood as Brother John Anglicus. Joan becomes a great scholar and healer and eventually decides to travel to Rome to further her knowledge and reduce the risk of her true identity being revealed.

Once in Rome, Joan’s intelligence and quick-thinking are rewarded as she becomes the personal physician to the Pope Sergius. Through some fortunate twists of fate, Joan is soon reunited with her one true love, Gerold and rises through the ranks to become the first female Pope. But Joan is forced to make a decision between love and power…and pay the price. 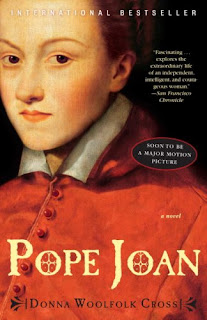 
Why you should read it:


What was the last book that you read? Did you enjoy it? We’d love your thoughts – please comment below…

Email ThisBlogThis!Share to TwitterShare to FacebookShare to Pinterest
Labels: Books